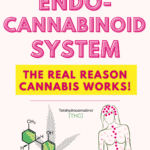 Why You Will Love This Guide

When I first learned about my endocannabinoid system, a lightbulb went off; "so this is why cannabis makes me feel so much better."

The endocannabinoid system, or ECS, is the true core of the mind-body connection. We all have the ability to care for it with our lifestyle choices.

Members of my Well With Cannabis Community know that they can use cannabis to support their ECS, and now you can, too!

In this guide, I will cover everything you need to know about your ECS and how to use cannabis and other healthy lifestyle choices to support it.

Just like the immune system and digestive system, all mammals, including human beings, have a biological system known as the endocannabinoid system (ECS).

Also known as the endogenous cannabinoid system, the ECS affects every aspect of our human experience, from memory and pain relief to stress management and even reproduction.

The discovery of the endocannabinoid system is relatively new, happening in the early 1990s, and there is still a lot we don’t know yet.

What we do know is that the ECS is the reason why cannabis affects everybody differently.

Below is an overview of the endocannabinoid system basics, so you can better understand how it affects your body.

Why Does it Matter?

The ECS is a complex cell-signaling system made up of a network of messengers, receptors, and enzymes.

According to Oxford Academic, this system has a profound influence over our health, our bodily functions, and our physiological processes.1

The ECS has the ability to work with chemical compounds, like cannabinoids and terpenes, through receptors located throughout the human body.

The job of the ECS is to help with maintain homeostasis, or the stability of your internal environment.

This in turn can impact:

The primary role of the ECS is to maintain internal stability - physically, mentally, and emotionally.

Perfectly summarized in 1998 by Professor Di Marzo, the job of the ECS is to help us: “relax, eat, sleep, forget, and protect”.2

Parts of the Endocannabinoid System

The ECS is made up of three major components: messengers, endocannabinoid receptors, and enzymes.

Here is a simple endocannabinoid system diagram for my visual learners to help you visualize the ECS as a whole.

Endo = from within (internal)

Endogenous cannabinoids, or endocannabinoids for short, are made by your body.

There are two primary endocannabinoids made by your body: anandamide and 2-AG.3

Why care about anandamide?

Named after the Sanskrit term for bliss, it is referred to as “the bliss molecule” - and for good reason!4

It is believed that 2-AG is produced in response to changes sensed in the body and that this molecule talks to the inside of cells and tells them what to do to maintain homeostasis.5

Exo = from outside (external)

Exogenous cannabinoids are not made by your body.

They are found in plants, like the phytocannabinoids contained within the cannabis plant, and are often simply referred to as cannabinoids.

When consumed, these plant-derived compounds interact with the body’s endocannabinoid system, triggering a variety of effects.

There have been over 110 cannabinoids already identified, including the most well-known cannabinoids CBD and THC.

Your ECS contains receptors that receive the information from the messengers, or cannabinoids.

There are two main types of cannabinoid receptors in your body - CB1 receptors and CB2 receptors.

Fun fact: it is believed that there are more cannabinoid receptors in your body brain than any other receptor type.7

Your CB1 receptors are found mostly in the brain and central nervous system, along with other tissues including the heart, lungs, and uterus.

Why care about your CB1 receptors?

The CB1 receptor has been recognized as "an important therapeutic target for pain, appetite modulation, glaucoma, multiple sclerosis, and other indications”8.

The CB1 receptor plays a role in the psychoactive component associated with THC consumption as the THC binds to the receptor.

CB2 receptors are found mostly in the peripheral nervous system and tissues of the body, including the immune system and immune cells.

Why care about your CB2 receptors?

It is believed that CB2 receptors are a mediator for suppressing pain & inflammation and have high potential ‘as therapeutic potential in inflammatory, fibrotic, and neurodegenerative diseases'9.

While many tissues in the body can contain both CB1 and CB2 receptors, each is believed to be linked to a different action and associated physiological effects.

How to Care For Your ECS

There are many ways to care for your endocannabinoid system, from healthy lifestyle behaviors to cannabis consumption.

Learn more about the possible benefits of incorporating cannabis into your routine as a way to care for your entire body.

Now that you have a better understanding of your endocannabinoid system, you can begin to understand how the use of phytocannabinoids can play a major role in human health.

They type of cannabinoid you consume will produce different psychological effects and affect a range of physiologic activities.

The most common cannabinoids from the cannabis sativa plant include CBD, THC, CBG, and CBN.

Whether it be CBD from a hemp plant or THC from your medical marijuana doctor, taking the time to experiment with each of these different cannabinoids will help you understand how each one makes you feel.

Just be careful to avoid any synthetic cannabinoids that may make you sick, like those found in delta-8 products.

The most interesting thing about CBD and THC is that they each affect each one of us very differently.

And each cannabinoid has a different function within your body, thus the effect will not be the same for everybody.

We could all take the same 10mg THC tablet and all have dramatically different physical and mental experiences.

Dr. Ethan Russo, a prominent cannabis physician, and the researcher believes that every endocannabinoid system has it’s own ‘tone’, or baseline activity.

Your unique endocannabinoid "tone" is based on your physiology, meaning that we all have different levels of tolerance and reactivity.

This baseline activity is a reflection of the endocannabinoids anandamide and 2-AG and “their production, metabolism, and the relative abundance and state of cannabinoid receptors”10.

This explains why different cannabis products can produce different effects for different people.

Understanding that your ECS is unique to YOU will help you to understand your baseline tolerance.

It is believed that many physiological and outside factors can affect the endocannabinoid tone of a person.

Dr. Russo’s theory is supported by emerging evidence, with the greatest evidence supporting an endocannabinoid system deficiency as being the center of development for migraine, fibromyalgia, IBS, and other autoimmune disorders.

CBD and the ECS

CBD, also known as cannabidiol, is one of the most popular cannabinoids, and for good reason.

This non-intoxicating cannabinoid interacts directly with our own endocannabinoid system to produce a wide range of therapeutic effects, from an anti-anxiety to an anti-inflammatory.

CBD binds to CB2 receptors and ultimately produce the antioxidant and anti-inflammatory effects we commonly associate with CBD11.

While the specific mechanism of action of CBD is still being studied, many people are anecdotally finding relief from a range of issues.

There is a huge variey of CBD products including CBD oil, CBD flower, and CBD topicals to try.

Learn More About the ECS

If you are looking for a more in-depth look at the endocannabinoid system and the role it plays in optimizing your health, enroll in my Cannabis Compass Online Course.

The entire second lesson is dedicated to teaching you about your ECS and how to care for it.

The lesson will dive into the various mental and physical ailments cannabis use used for, the science behind the ECS, explore: 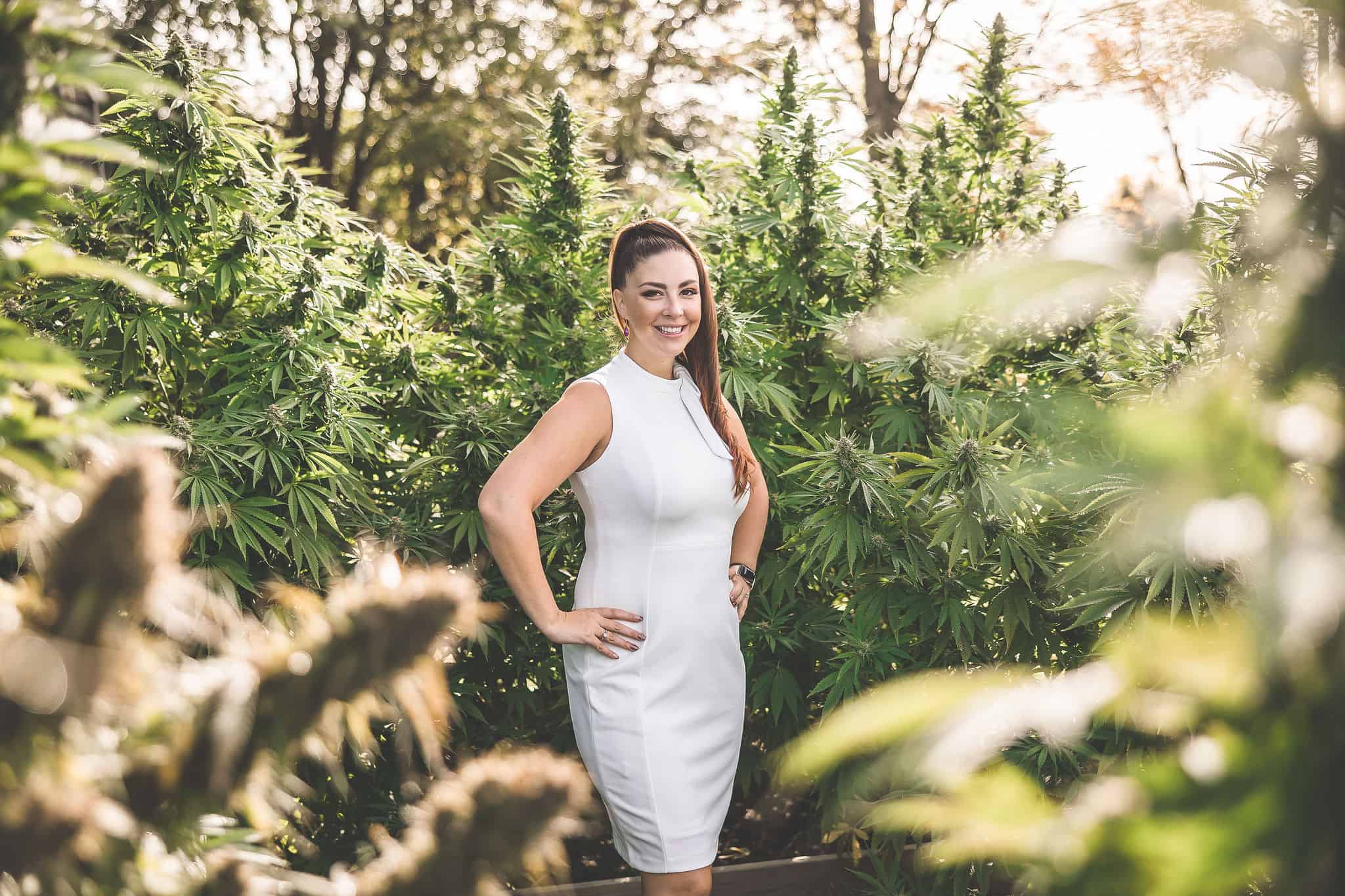 High there 🌿 My name is Emily Kyle and I can teach you how to harness the power of the cannabis plant to naturally manage pain, anxiety, and the stress of every day life so you can bring back joy, spark productivity, build better relationships and live an overall healthier lifestyle.

Cannabis changed my life, and it can change yours, too →